Podcast host Kathy Sipple speaks with Neal Davey, ‘Purveyor of Fate’ at Figure Eight Brewing in Valparaiso about their efforts to run as sustainably as possible.

Sustainability is an important part of our business model… There are always things we can do to try to control consumption of water… We do our best to make sure any waste is taken out of the equation. We recycle what we can… We explore different connections—how can we reach out and give as much back to the community as we can. Our spent grains go to several local farmers to feed their livestock rather than into the waste stream. ~ Neal Davey, Figure Eight Brewing

Kathy shares her experience with upcycling some of Figure Eight’s spent grains into delicious (and nutritious) recipes. At the request of a few who have asked, here is the recipe for pizza dough:

Makes a hearty base for thick crust, homemade pizza. The spent grains give it a nutty, chewy texture that was a nice departure from the bland, ‘white bread’ pizza crusts that have become common. Knowing that I was using locally sourced, upcycled ingredients to make a meal was a nice bonus. Consuming a pint of Figure Eight beer with the pizza kicks it up a notch!

Mix all ingredients in a bread machine on dough setting. Remove and use immediately or freeze for future use. Thaw at least 24 hours prior to baking and allow dough to be restored to room temperature before using.

Tip: use a little olive oil on your hands before handling the dough. Pat the dough into a rectangular cookie sheet rather than rolling it.

We tried the crust topped several ways, but the favorite was with basil pesto, sun dried tomatoes and goat cheese.

Bake in a pre-heated oven at 375 degrees for 15-17 minutes or until cheese has melted and crust is lightly browned.

Note: This would probably work just fine without kefir sourdough specifically, but I recently began making kefir, had it and wanted to give it a try.

Also mentioned in this episode:

You may also enjoy Save the Planet: Drink Local with Sommelier Simon Barrios 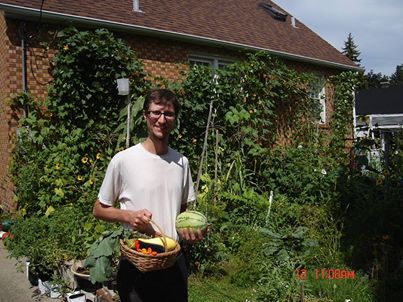